Strata is multi-layered and contains information on the many strands of my background and exhibitions. 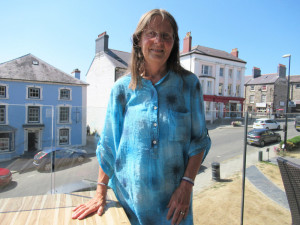 cv
Born in London in 1954, Andie studied Graphic Design at The London College of Printing 1971 – 1975. She worked as an art editor, graphic designer and illustrator for magazine and book publishers 1975 – 1983.

Moving to Wales in 1983 provided the catalyst for Andie to commit fully to developing her painting and drawing career. She also became a student of Tai Ji, an ongoing study that informs both her work and her lifestyle on a daily basis.

Andie has exhibited her paintings regularly both in the UK and abroad since1993 and was elected to the Society of Women Artists (SWA) in 2012. She exhibits annually at The Mall Galleries London with the SWA having won the St Cuthberts Award in 2011 and the Frank Herring Award in 2015. Other awards include the Oppenheim-John Downes Memorial Award in 1993 and 2007, Art Matters Open and Artsfest Fishguard.

In 2020 Andie was elected to full membership of the Royal Watercolour Society of Wales – patron HRH The Prince of Wales. ‘Whilst painting in watercolour has been described as a “truly English Art” There is a fine tradition of painting in this medium in Wales going back to the late 18th Century.’

For more information on Source, please visit the following pages: